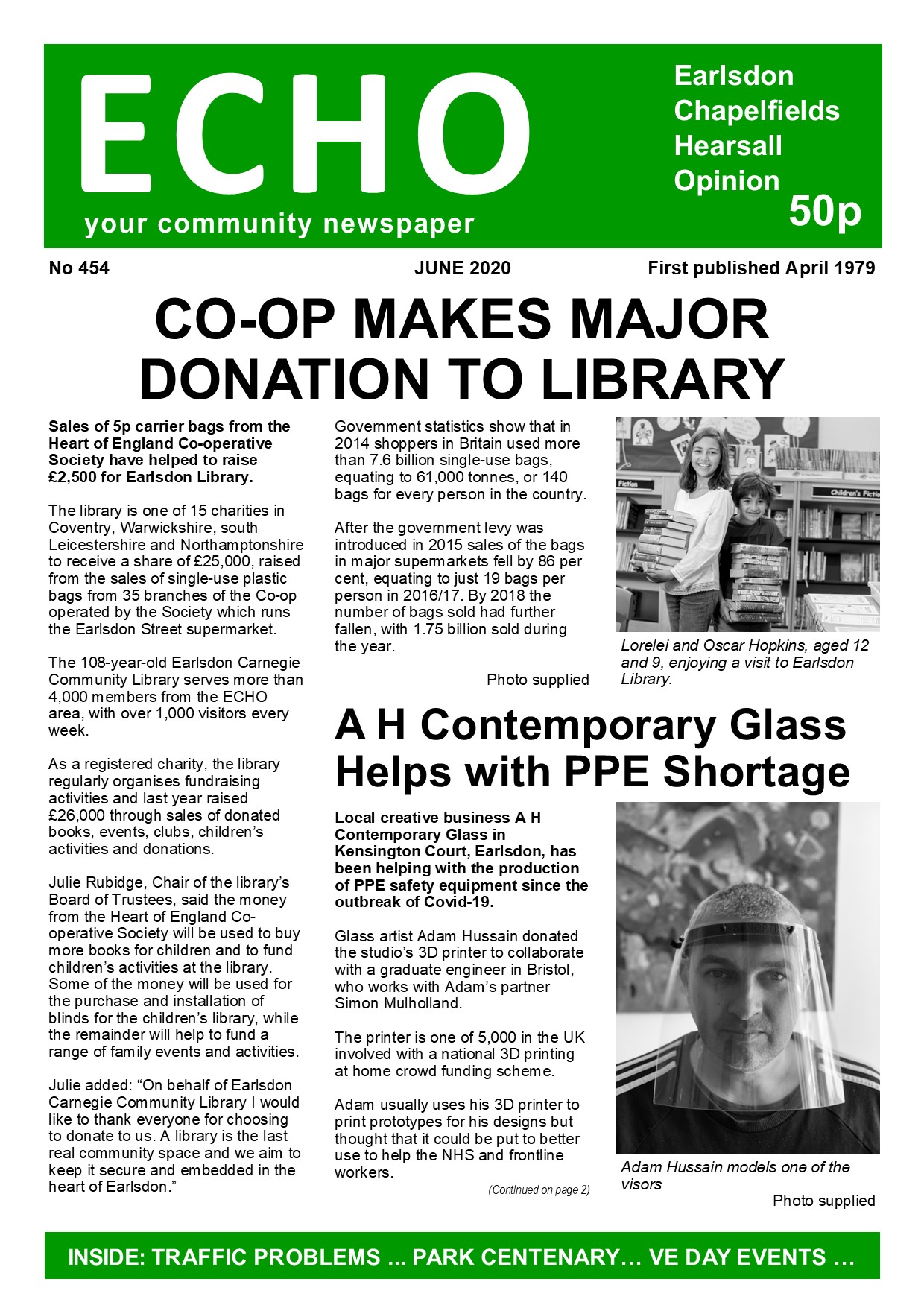 The deadline for the July 2020 issue is Monday 15 June and it will be available by Saturday 27 June.

A burglary has occurred at a residential address on Winifred Avenue in Earlsdon, between the 19th and 20th May.

If you saw any suspicious activity in that area during the material times, or you have CCTV footage of the incident, please contact West Midlands Police by telephoning 101 or by going online to Chat

ECHO’s regular readers will know that we always welcome additional material from local people and organisations. That’s even more important in the current situation. We remain hopeful that we can keep publishing monthly issues but with most of the regular community activity that we report on postponed or cancelled, the more contributions we get from the wider community the better.

Please send us anything you think will be of interest to ECHO readers including what you are doing to keep busy or support the community during lockdown, puzzles and other ideas for activities for children, historical reminiscences of the area, and so on. We can’t guarantee to publish everything but we will give all material fair consideration.

The deadline for the next issue is Monday 20 April. Please email to newsdesk@echonews.org.uk

One of the features of the coronavirus crisis is that people appear to be starting to reverse a perceived or actual trend of ignoring experts and science.

All advice should be delivered and received with caution.

The following has been shared by an NHS contact and originates from Johns Hopkins University in the USA.

ECHO is not in a position to vouch for the validity of every statement in it – even the first statement, that the virus is not a living organism, is a matter of dispute amongst scientists because the definition of ‘alive’ is not universally agreed.

Nonetheless it contains enough food for thought to justify posting, even though we are prepared for people with the required expertise to question or disagree with some or all of it if they feel it necessary.

* The virus is not a living organism, but a protein molecule (DNA) covered by a protective layer of lipids (fats) which, if absorbed by the cells of the ocular, nasal or mouth mucosa, changes their genetic code. (mutation) and converts them into multiplier and attacker cells.
* Since the virus is not a living organism but a protein molecule, it is not killed, but decays on its own. The disintegration time depends on the temperature, humidity and the type of material in which it is found.
* The virus is very fragile; the only thing that protects it is a thin outer layer of fat. That’s why any soap or detergent is the best remedy, because the foam BREAKS THE GREASE (that’s why you have to rub so much: for at least 20 seconds or more, and make a lot of foam). By dissolving the fat layer, the protein molecule disperses and breaks down on its own.
HEAT melts the fat; then use water above 25 degrees to wash your hands, clothes and everything else. In addition, hot water produces more foam which makes it even more useful.
* Alcohol or any mixture with alcohol greater than 65% DISSOLVES ANY FAT, especially the external lipid layer of the virus.
* Any mixture with 1 part of bleach and 5 parts of water directly dissolves the protein, breaks it down from the inside.
* Hydrogen peroxide helps a lot after soap, alcohol and chlorine, because peroxide dissolves the proteins of the virus, but you have to use it pure and it hurts the skin.
NO BACTERICIDES. The virus is not a living organism like bacteria; one cannot kill with antibiotics what is not alive, but rapidly disintegrate its structure with all that has been said.
* NEVER shake used or unused clothing, sheets or clothing. While it is glued on a porous surface, it is very inert and disintegrates only between 3 hours (fabric and porous), 4 hours (copper, because it is naturally antiseptic; and wood, because it removes all moisture and does not let it detach and disintegrates), 24 hours (cardboard), 42 hours (metal) and 72 hours (plastic). But if you shake it or use a duster, the virus molecules float in the air for up to 3 hours and can settle in your nose.
Viral molecules remain very stable in external or artificial cold like air conditioners in homes and cars. They also need moisture to remain stable and especially darkness. Therefore, dehumidified, dry, warm and bright environments will degrade it more quickly.
* UV LIGHT on any object that may contain it breaks the virus protein. For example, to disinfect and reuse a mask is perfect. Be careful, it also breaks down collagen (which is a protein) in the skin, eventually causing wrinkles and skin cancer.
* The virus CANNOT go through healthy skin.
* Vinegar is NOT useful because it does not break the protective layer of fat.
NO ALCOHOL or VODKA. The strongest vodka is 40% alcohol and you need 65%.
* LISTERINA (it’s an American mouthwash) IF YOU NEED IT! It’s 65% alcohol.
* The more space is limited, the higher the concentration of the virus. More open or naturally ventilated, less.
* This is super said, but you have to wash your hands before and after touching the mucous membrane, food, locks, knobs, switches, remote control, cell phone, watches, computers, desks, TV, etc. And when using the bathroom.
* You must HUMIDIFY DRY HANDS, for example wash them a lot, because molecules can hide in micro wrinkles or cuts. The denser the moisturiser, the better.
* Also keep your NAILS SHORT so that the virus doesn’t hide there.

The April issue of ECHO in now on sale but a few of our usual outlets are currently closed. It is available from these shops:

With an extra special effort we have managed to complete the April issue of ECHO and it is now ready to be printed. It should be on sale by the end of the week.

We cannot rule out the possibility that our printing and distribution may yet be interrupted but we hope we can carry on being of service to the community in these difficult times.

Many of our normal sales outlets are closed, notably the churches, but we will still aim to provide copies to the ones which are open – notably the Co Op stores in Earlsdon Street and Allesley Old Road, Earlsdon Street Post Office and some other food outlets and general stores. If you are purchasing supplies for isolated friends and family from these places, or you are among the ones isolated and are being supplied in this way, then you could consider adding a copy of ECHO to your shopping list with no additional risk but please do not make extra trips solely for that purpose.

Should subsequent events prevent us getting the issue out, we will make the content available online and some if it will be posted online, and kept up to date, in any case.

We will make an assessment next month on whether we can produce a May issue.

ECHO and our great community will survive and thrive once more.

Please look after one another and stay safe.

From Thursday 19 March, and until further notice, the restriction on travel before 09.30 has been suspended meaning that you can travel free of charge on all bus and tram services in the West Midlands Network area from the start of service – excluding services run by A&M Group – Flexibus.

Many leading supermarkets have decided to open early or set aside the first hour of business exclusively for older customers and those most vulnerable to Covid-19. It is hoped that being able to use your pass earlier will allow you to take advantage of this.

Please bear in mind the Government’s advice about restricting social contact, particularly if you are over 70 or have underlying health conditions, and of course please do not travel if you are self-isolating. If you are unsure then please refer to the latest advice from the NHS and Public Health England here

Following Government Coronavirus advice, both the Criterion and Albany theatres have decided to close until further notice.

Anyone who has bought advance tickets will be contacted directly but please see the respective websites for the latest information:

From Friday 21 February until Sunday 1st March, a small stretch of Allesley Old Road between Queensland Avenue and Kingsland Avenue OUTBOUND from the City will be closed for drainage works.

This will require diversions for motorists and for two bus routes.

The no. 8/8A bus service to Eastern Green will be diverted up Queensland Avenue, along Hearsall Common and Broad Lane and into Glendower Avenue, resuming its usual route from Lyndale Road.

The no. 23 bus to Allesley Park will not turn left into Four Pounds Avenue, instead continuing along Holyhead Road and turning into Grayswood Avenue, picking up its normal route at the junction of Grayswood Avenue and Allesley Old Road.

Both services will run as normal INBOUND to the City.