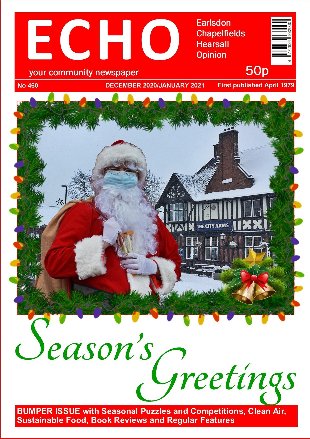 The deadline for the February 2021 issue is Monday 18 January and it will be available by Friday 29 January.

This information has been sent on behalf of West Midlands Police.

Stay alert: watch out for a fake text message claiming to be from the NHS claiming you are eligible to apply for the vaccine and will include a link ‘to apply’.

The link takes you to a fake NHS website and asks you for payment and other personal details.

Remember to remain vigilant and remember that the NHS will never ask for payment for the vaccine.

Do not respond to the text message or click on any links. Suspicious text messages should be forwarded to 7726. This free-of-charge short code enables your provider to investigate the origin of the text and take action, if found to be malicious.

If you have been a victim of fraud then please contact Action Fraud 0300 123 2040 or on their website at actionfraud.police.uk

Please share this message with your family and friends so we can prevent as many people as possible from falling victim.

Thank you and stay safe.

There was a significant error in the piece in our December 2020 / January 2021 issue on Berkeley Court, the apartment development in Warwick Street.

We stated that the site was previously occupied by HIP Refrigeration, which was incorrect. HIP are still trading from the adjacent site.

The error was caused by a confusion on our part between two different historic planning applications which were both still visible on the City Council’s planning portal, one of which was for 19-35 Warwick Street and one for 37 Warwick Street but which was also referred to in some contexts as 35-37 Warwick Street.

We apologise to HIP for this mistake, which was entirely our responsibility.

The cut-off for entries for the four cash prize competitions in our December / January issue is noon on Monday 4 January.

If you still intend to enter any of them: Wordsearch, Anagrams, Crossword or Quiz of the Year, please do so in good time. At this stage an email to

is the quickest, most reliable way to ensure your entry reaches us in time to go into the hat.

Sherrie Edgar writes seeking support for the campaign to save part of the legacy of an Earlsdon-based architect of the early 20th Century:

Gilbert’s cinema building was originally built for Frankie Turner in 1912 had turned out to be the first Odeon cinema. Public consultation led by Q+A Planning Ltd ends on 7 January 2021 after an application submitted on the 19 October 2020, with a full summary of plans drawn in July 2020. It was made public knowledge in April 2020 after a tweet from the 1500 capacity live music venue ‘The Empire’, saying they have to vacate due to the building being demolished for student accommodation; however The Empire lease had run out 12 months prior, as reported by Elis Sandford at Coventry Telegraph on 3 April 2020.

J. H. Gilbert’s architectural offices were at 59 Well Street in Coventry City Centre. He had designed many other famous arts and cultural entertainment buildings in Coventry such as The Globe Theatre, described as a ‘marvellously ornate frontage’ which opened in 1913 and was Oscar Deutsch’s (founder of the Odeon cinema chain) second cinema. In the 1990s it turned into The Colosseum Nightclub, which is now known as the Kasbah. Gilbert also designed La Continentale Cinema, on Earlsdon Street, opened in 1911, the Prince of Wales Theatre on Stoney Stanton Road, opened in 1913, and what which is now the Ellen Terry Building, the entrance featuring a bold Edwardian, baroque style building in white faience topped with balustrade and dome, part of the Gaumont in 1928.

Coventry is known historically for having as many as 30 picture houses, once said to be the most in a city. These included the Broadway, later Astoria, in Albany Road and the Plaza in Spon End. There was a demise of the cinemas in the 1960s with the growth of television. By the 1990s, Coventry had only two traditional cinemas still in operation, Theatre One (formerly the Alexandra), consisting of three screens and the Odeon Film Centre (formerly the Gaumont) with five screens.

Currently, Coventry has two multiplex cinemas, the Odeon Skydome and Showcase Cinema in Walsgrave. The state of cinema in Coventry is poor, with no independent site to support our thriving filmmaking, filmmakers, moving image and film screenings for the city and its region.

J. H. Gilbert drew up plans for The Paris (opened August Bank Holiday, 1912) as a 558-seat picture theatre, later expanding to 771 seats in April 1913 due to popular demand. Originally called ‘The Crown’, it had a very ornate facade above the entrance which held a large golden crown, either side of which were two circular windows. The entrance was up five steps to the central ticket box, flanked on either side by doors leading into the auditorium, approximately 22.8m x 11.5m (75ft x 38ft), sloped down towards the stage and screen. Seats were either side of a central gangway. In 1925, the cinema was taken over by the young chairman of a company called Victory Motion Pictures Ltd, Oscar Deutsch, the founder of the Odeon Cinemas chain. Born in Balsall Heath, Birmingham, his vision was to change the entertainment landscape of Britain; he started this in Coventry, later buying another picture house in Perry Barr, Birmingham, in 1930. Oscar Deutsch and Mr. Noakes sold ‘The Crown’ between 1930 and 1931 to Mr. H.F. Allen.

The Crown was temporarily closed in October 1940 due to air raid damage to the roof. After the war it had a complete modernisation and the old facade was rebuilt to give a new entrance. It was reopened March 1958 by the Lord Mayor of Coventry, Alderman Mrs Pearl Hyde. The opening film was ‘Her Crime Was Love’ starring Eve Bartok, who made a personal appearance at the opening. The policy was to show continental films; hence its full name in 1958 was the Paris Luxury Continental Cinema. The Paris closed its doors for the final time on 21 November 1981.

By 1999, The Paris found itself the centre of cultural history again, as one of many clubs in the city to support the local rave scene as The Foundry, then becoming Riley’s American Pool and Snooker Club, then a live music venue, The Empire.

The Coventry City Council case officer is Darren Henry. The planning summary notes the “Conservation Area Appraisal does not identify the application site as a building which makes a positive contribution to the conservation area so its existing contribution must be considered to be, at best, neutral. The loss of the existing building and the potential for this to cause harm to the character and appearance of the conservation area must be considered in this context.”

Far Gosford Street Conservation Area is based on a former extramural medieval suburb located to the east of the old city walls on what was the main road out of Coventry to London and Leicester. The existing building at the application site dates from the early 20th century. It is largely of a functional design albeit one that follows the historical, medieval plot pattern with a narrow frontage to Far Gosford Street. The decorative features to the original frontage of the picture house have unfortunately been lost and the interior of the building has been adapted significantly over the years.

With lectures going online, Brexit and the loss of public spaces, do we need more student accommodation in what is already a highly dense student occupied area, on Coventry’s most cultural street which hosts the Fargo Village, The Pod Cafe and various multi cultural restaurants and shops?

The justification to keep The Empire (formerly The Paris) is that Coventry needs to retain some historical cultural history and landscape, the building can be maintained with cultural investment and Historic England support. This venue is perfect for its future arts and cultural projection, to house organisations that support enterprises, music and art schemes such as theatre, dance and visual arts. This venue is a place for the city to assemble and seek cultural engagement; it will be a positive to continuation of the Fargo Village initiatives, be a neighbouring venue, to be an independent place to host in the wider city, adding vitality and visibility to the cities investment to the creative industries. The city has a strong filmmaking industry, with talented filmmakers and theatre graduates from Coventry University and born in Coventry, and its region.

Coventry must oppose planning application to demolish The Empire. We need to save J. H. Gilbert’s building and preserve Earlsdon’s architect’s legacy. We are City of Culture 2021, and our neighbouring city hosts Birmingham 2022 Commonwealth Games cultural program. The West Midlands has an acclaimed arts and culture sector that is growing rapidly, supported by organisations such as The West Midlands Cultural Response Unit funded by the Arts Council England and the Midlands Engine, our city needs to preserve its heritage and develop places like this for concertgoers in years to come.

Planning details to be found on this link: http://planning.coventry.gov.uk/portal/servlets/ApplicationSearchServlet?PKID=811847

The Criterion Theatre are seeking a volunteer to act as Customer Experience Director, starting in the New Year.

For details go to: 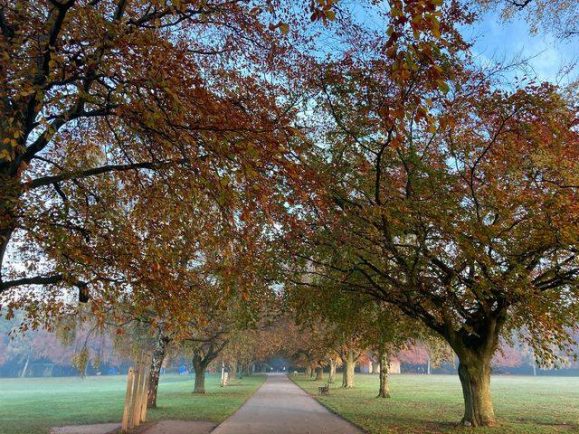 The next edition of ECHO will be our once a year double issue covering December AND January.

Please contact us before the deadline date, Monday 16 November, with anything to be included for either month: articles, letters, adverts and events for the Diary (much reduced in number, sadly).

The Criterion Theatre is holding an on-line Promises Auction to raise funds to help it keep going into 2021, its 60th birthday year. Bidding is now open and the catalogue can be viewed from:

There are some Items of Value here also that Earlsdon folk might be interested in. Bidding closes on 10th November and reopens when we are running a live event on Zoom as a grand finale.