Many of our older ECHO readers will remember Doris and Jack Smith who ran Fane’s Newsagents at the top of Earlsdon Street (now Brian Holt Estate Agents) for many years until they retired in 1981.  Doris moved to the Wirral to be near her daughter, Averil, and kept in touch with this area through her regular copies of ECHO.  Sadly Doris passed away, at the age of 95, in 2012, but she spent much of her last months completing her memoirs of World War Two, which Averil kindly sent to us.  Here we reproduce her account of the first months of the war and plan to publish more extracts in future issues. 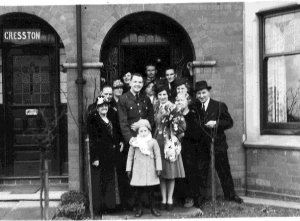 In 1939 there was more and more talk about war and my fiancé Jack made up his mind to apply to join the RAF, rather than wait to be ‘called up,’ when he wouldn’t have a choice between the Army, Navy or RAF. Jack was sworn into the RAF on 1 September 1939 and war was declared two days later.  He was sent to Lincoln Aerodrome to train as an air-gunner and wireless operator.   He was there for seven weeks, and was then sent to Scotland.

Householders had to buy ‘black-out’ curtain, or dye old ones black to make sure no light chinks shone from windows to guide enemy planes.  The ARW (Air Raid Warden) would walk the streets and shout at anyone who was showing a light. There were no street lights during the war, and everyone carried a small torch.  Shops didn’t light their windows and important places, like town halls, banks, hotels and hospitals had sticky tape criss-crossed over the windows to help stop flying glass.  Sandbags were provided and ‘walls’ built around important buildings too.  Householders could buy the thick sticky tape for windows if they wanted, but we didn’t.

Anderson shelters, those made of bent over corrugated steel, were issued well into the war, and weren’t available at this stage of things.   Brick air raid shelters were built on one side of roads all around town.  This caused an obstruction, even though there were few motor vehicles, especially cars then, and petrol was in short supply and rationed.  Cars were only used when absolutely necessary. Petrol coupons were allocated according to how many miles you had to travel to work, or if you were in the forces you were able to get a few more.  Petrol cost 1 shilling and 6 pence a gallon during the war, that’s 7½ new pence for 4.546 litres. People walked, cycled or used public transport.  Many deliveries were still made by horse and cart – right up into the 1950s when petrol lorries gradually took over.

Ack-Ack (anti-aircraft) guns were mounted on the back of flat-bed lorries and moved around the city to different positions each night. Some nights they were positioned outside our house in Holyhead Road. When they were fired at enemy aircraft, they made the terraced houses shake.  During these early autumn days we didn’t know there was a war on.  Our lads were being called up, but no news was reaching us apart from hearing that Hitler and Germany had taken Poland and Austria, and of course my Jack was away.  I was managing Wharton’s, a newsagents, tobacconists and post office in Stoke Aldermoor, where I worked until March 1940.

During the winter of 1939 – 1940 I was planning our wedding.  We had eventually decided to get married after knowing each other for five years and being engaged for two and a half.  I went to see the vicar of St. Thomas’s in Keresley, Jack’s parish, and booked Easter Monday, 25 March 1940.  I bought my wedding clothes, a beautiful two-piece in dusty pink, using my ration coupons.  It was impossible to be married in white unless you already had a wedding dress, because material was difficult to get and it was all rationed.  Jack’s Mum bought me a pair of beautiful silk cami-nicks for my wedding day.  I went to the same shop in Corporation Street and they had a nightdress which was the same design; ecru Chinese pure silk with ecru embroidery, it was most beautiful so I used some more coupons out of my ration book!  One of our friends from the greengrocery trade made my bouquet of orchids.  A week before our wedding I had a letter from Jack saying he would be home two days earlier than planned, so I went and saw the vicar and he agreed to marry us on the Easter Saturday squeezing us in at 5pm!