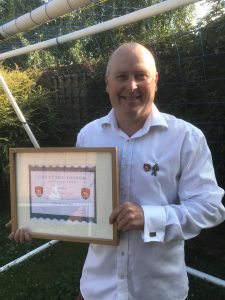 With Coventry United F.C. now established at the Butts Park Arena, the directors of the football club have announced the formation of a Vice Presidents Club. Long-term supporter Keith Green (photographed) has been the first to sign up.

Joining costs £1,000 a year and this gives you:
– Appearance in the Vice President roll-of-honour on the Clubs new website
– Advertisements in the match day programme and members newsletters where applicable
– Regular acknowledgement tweets
– Corporate hospitality for two guests once per season with stadium tour
– Two season tickets for both men’s and women’s senior sides and the annual presentation night
– A choice of Vice Presidents man-of-the match (combined with other VP votes)
– Membership of the supporters club
– The opportunity to work with the directors of Coventry United on joint initiatives
– Invitation to participate in one board meeting followed by dinner
– The ability to customise your benefits package to suit your needs

Keith Green says : ‘I have been a fan of Coventry United since the team was formed in 2013, and have only missed a very few games both home and away. When the opportunity came to become even more involved with the Club, and to become the first member of the Vice Presidents Club, I jumped at the chance.’

Peter Reynolds, Chairman of Coventry United F.C., added: ‘With our move to the Butts Park Arena, we are able to provide more facilities and opportunities for our growing number of supporters, and we were delighted when Keith, one of our longest serving fans, became our first Vice President. When we established Coventry United our aim was to create a true community club, offering opportunities for all, and with our new Vice Presidents Club we know we can continue to deliver on this promise.’