May issue out now 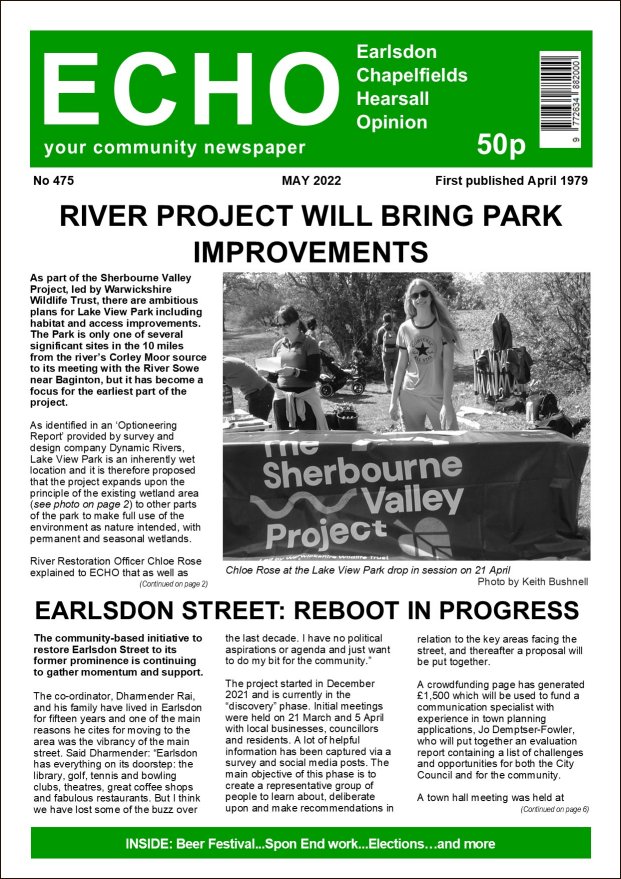 The deadline for the June 2022  issue is Monday 16 May and it will be available by Thursday 26 May.

George Power is fundraising this month for a Neurodiverstiy project for his School, Earlsdon Primary with the ADHD Foundation.

His mum Simone told ECHO “He is currently on the waiting list for a Neurodevelopmental Assessment and we wanted to do something to raise awareness within the community and help him to learn, understand and teach others about what he is going through.”

George has set himself a target to run 26 miles in the month of May and is already three quarters of the way to his fundraising target.

On Wednesday 11 May at 7.30pm, the Albany Club will be hosting the World’s Biggest Pub Quiz, supporting local charity Pass the Smile for Ben, which raises funds for research into rhabdomyosarcoma, a rare type of soft tissue cancer, and for supportive care.

The fee will be £10 for a team of up to 4 people, payable on the night. To register your interest, or for more information, please email: president@albanyclub.co.uk before 4 May and then go along to enjoy a fun evening.

As well as the quiz, there will be other activities, including a bottle raffle, for which contributions would be welcomed.

You can find more information about the World’s Biggest Pub Quiz at: https://worldsbiggestquiz.pubaid.com/ 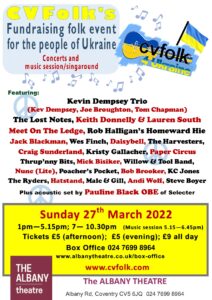 Cllr Bally Singh has setup the following petition to try and preserve the legacy of the Black Horse pub for the future. It accepts that demolition is preferable to a driving charge, but aims to restore some of the former pub building for an alternative use at another location.

“We the undersigned petition the Council to recognise that whilst we support the Council’s clean air proposals to avoid a government imposed £12.50 driving charge in the city; we also want to preserve the legacy of the former Black Horse pub (currently apartments planned for demolition), so ask that the Council consider restoring the main heritage of the building for an alternative use linked to our city’s arts and culture offering.”

Cllr Singh suggest that alternative uses to preserve the legacy of the Black Horse pub could be:
– A mock pub art exhibition in the style of the 2021 Turner Prize winning Array collective, shown at Coventry’s Herbert Art Gallery. The re-imagined Black Horse pub would address social and political issues that have impacted Coventry throughout its magnificent history
– A digital and physical record of the Black Horse pub displayed in the Local Collections exhibits at the future Coventry ‘IKEA building’ museum, including oral, pictorial, sound, and physical pieces.
– A restored working pub set during the historically important Watchmaking era of the city.

The restored pub could be situated in an alternative location such as the Canal Basin, and would function as a popular leisure attraction serving real local ale and beers as well as traditional pub food including fish and chips!

The Festival of Hope event ‘Strictly Hopeful Dancing’, due to take place from 7-9pm on Saturday 12 March at Hearsall Baptist Church Hall, has unfortunately had to be postponed.

We will advise if and when the event is rescheduled.

Performing LIVE in Spon End today (last performance at 3pm), Christopher Sidwell with local songs for local people. Pop down and see him on the corner of Upper Spon Street and Windsor Street / Barras Lane.

Local musician Christopher Sidwell is singing original songs about Spon End in a pavement performance in the company of Sponnie the Fish and 50 sea creature creations, outside Moira’s Wet Fish Shop, on the weekend of Saturday 5 and Sunday 6 March, between 11am and 3pm.

Moira’s Wet Fish Shop is a well known shop front on Upper Spon Street, Spon End. It is now the home of the organisation Grapevine, but the original shop front sign remains. Fish and other creatures of the sea, including Gary the Crab, a squid, angler fish, oddments of the deep, a seahorse, shark and mini-shoals, will form the backdrop in the pink sea window, to songs sung by Christopher Sidwell with his guitar.

Singer songwriter Christopher says, “You can join in with maracas, or shakers or with the chorus if you like. It’s light-hearted and informal. You can drop by anytime between 11am and 3pm.” The songs are all original and all about Spon End and Moira’s Wet Fish Shop.

The sea creatures in the window are made from all sorts. Brian Dickinson created one from stained glass, others are made of card and paper or plastic bottles and googly eyes.

Christopher Sidwell says, “To see the creations of people of all ages, cultures and walks of life together in one window is heart warming. It feels very Coventry. Moira’s Wet Fish Shop is as near we can get to a trip to the seaside here in Coventry.”

See the work of over 50 local artists from mixed cultures, abilities and ages – the youngest a 2-year-old, and the eldest over 80.

Learn a little about local businesswoman Moira Holt, the Moira of Moira’s Wet Fish Shop, and the local history of this fascinating area of Spon End just outside the Coventry ring-road.

Black Swan Terrace (where the shop is located in Spon End) is one of the oldest areas in Coventry and predates Christopher Columbus’s arrival in the Americas.
Meet ‘Sponnie’ the amazing one-metre fish with pink fingernails and see the history of Spon End represented in its tiles from the subway, its gears and cogs from the cycle makers and watchmakers, and its beautiful black fin-wing feathers from the former Black Swan Pub.

Sponnie will be accompanying Christopher Sidwell in a Silver Cross pram. Sponnie was created by Mary Courtney, Marie Sindel and Jack Shuttleworth from Fablab, and Christopher Sidwell. He made a popular appearance a few years ago and he is coming home .

Mary Courtney says, “Sponnie has dusted off his fins and redone his fingernails after lockdown. He’s ready to say hello and keep Christopher company”.
You can also design/draw some fish /sea creatures for yourself on the day.

Original songs about Spon End and Moira’s Wet Fish Shop will be performed on the hour for around 15 minutes between 11am and 3pm: 11am, 12noon, 1pm, 2pm, 3pm. 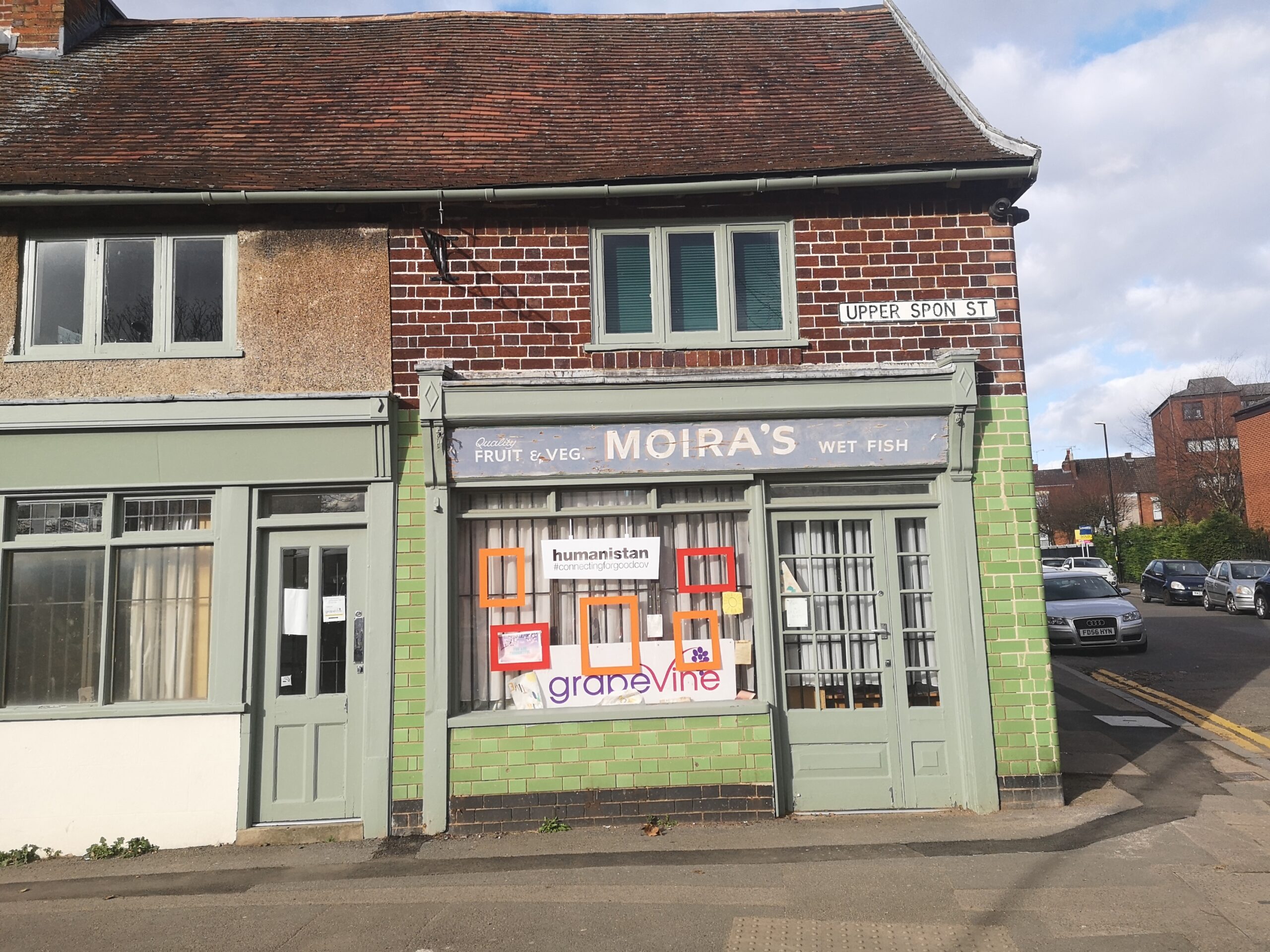 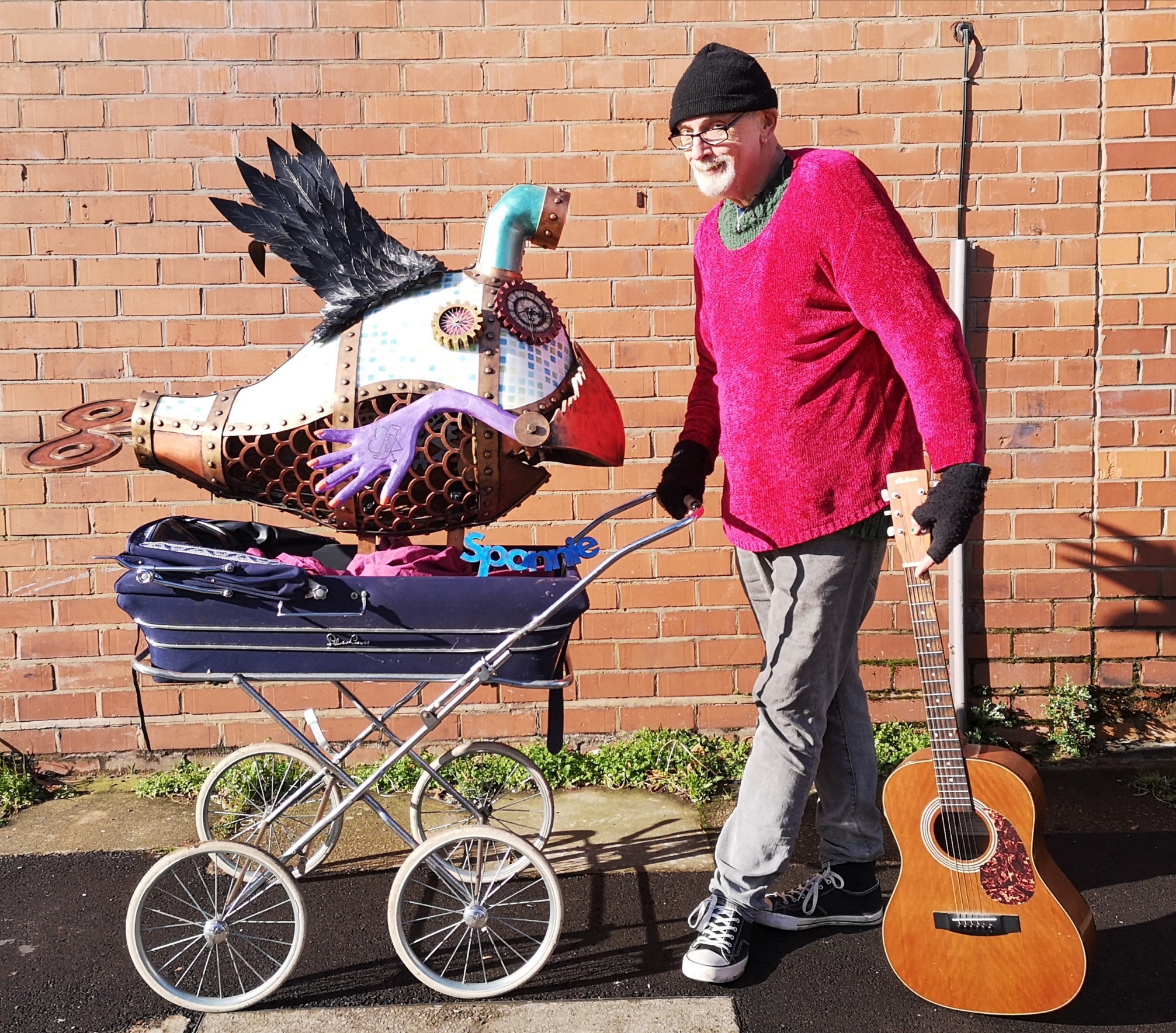 “The Cov Kids cartoon colouring book” by Earlsdon cartoonist Nick Shingler is now back on sale in Earlsdon Post Office.

Planning has begun for the Earlsdon Festival this year and, all being well, it will take place on Monday 2nd May.

Please be aware that, if applying for a stall in the playground, you will need to provide your own stall/table and it’s also advisable to bring a gazebo to protect you and your products from the weather (come rain or shine).

The closing date for applications is 19th February and the organisers plan to inform successful applicants no later than 27th February.

If you have any questions please email: earlsdonfest@gmail.com