On Friday morning, 21 February a service celebrating the life of Judith Keene (pictured, right) was held at Earlsdon Methodist Church by Rev. Pauline Warner, a former minister of the church. With a congregation of well over three hundred the church was overflowing. Judith died peacefully on Saturday 8 February at 9pm at Abbey Park Nursing Home. 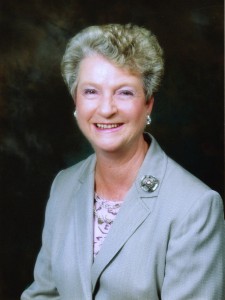 Over the past two years she had a difficult time following several major operations.    There were hopes that the surgery would be successful but after a rollercoaster ride of hope and disappointment she reached this final closure. Throughout the journey she remained brave and bright while fully realising what the final outcome might be.

Judy was born on 20 March 1937 to Willis Ferris Watson (Bill) and Lois Evadne Lytle Watson in Glens Falls, New York. She attended Glens Falls High School, where she was a cheerleader, and graduated in 1954. She obtained a BSc Degree in Textile Chemistry and Design at the University of Vermont in 1958.  After six months travelling in Europe she became an Associate Editor at the Good Housekeeping Institute in New York City and then moved to Bloomingdales department store in New York City as a trainee buyer. It was at Bloomingdales she met her husband, Victor. They were married at Christ Church Methodist, Park Avenue, NYC, on 20 May 1961 and enjoyed 52 years of married life.

With Victor she came to England and for eight years they lived in Nuneaton where their children, William and Mary were born.  Judith joined the Nuneaton Operatic Society and Ladies’ Circle which she served as Chairman.  She became a Sunday School teacher and Youth Club leader at St. John’s Methodist Church.

On moving to Coventry in 1969 she transferred to the Coventry Operatic Society and was an active member for over forty years. She became a member of Coventry Inner Wheel Club (wives of Rotarians) and was President of the club three times and was elected District Chairman of the West Midlands Inner Wheel District No.6 having served as District Overseas Service Chairman.  Judy enjoyed her golf and played regularly, at one time playing off 18.  She became Ladies’ Captain of Coventry Golf Club and was House Committee Chairman for three years.

Judith and Victor transferred their church membership to Earlsdon Methodist Church where she became a Sunday School teacher for many years. Judith was engaged in voluntary work all her life. She became a Trustee of Crossroads Care (a charity providing relief for family carers) and served for over 30 years.  At the church she was a Beaver leader (Cub Scouts for the under 7s) for 8 years and served as a Marriage Guidance Counsellor for 14 years. She certainly pulled her weight in the community.

Judith was a well known figure in Earlsdon, always with a happy smile and encouraging word and she will be greatly missed not only by her family but by all who knew her and by the community she served.