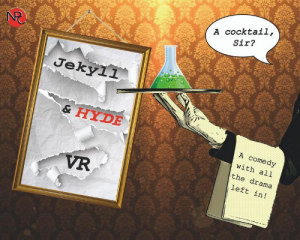 The critically acclaimed National Production Company has created a new adaption of Jekyll and Hyde in virtual reality – and filmed the production at the Albany Theatre.

This show was filmed over two days in the Theatre’s studio space, using specialist 360° recording equipment. The Albany’s Technical Manager said: “It was a great opportunity to get back into the theatre and get creative with the set, lighting, and sound. Virtual reality is a little different to our normal events but what a wonderful way to bring theatre to our audiences while we’re closed!”

The classic novella by Victorian writer Robert Louis Stevenson follows the complexities of science and the duplicity of human nature. The National Production Company’s ingenious adaption stays true to the original tale whilst embracing the comedic magic of theatre in a hilarious fast paced spin. Full of unexpected highs and lows, quick costume changes and sharp wit, all in virtual reality.

Jekyll and Hyde Director Andrew Alton said: “As live theatre is currently not an option, we had to figure out a way of getting our productions out there and virtual reality was a way of doing that whilst keeping that immersive and magical aspect of live theatre. It’s been so much fun to create and we can’t wait for our audiences to explore our VR world!”

Suitable for ages 13 and over, this show can be enjoyed anywhere from the sofa to the beach – wherever your mobile device can go, so can this show! Available to pre-order now, the package includes a cardboard VR headset and prod

uction programme with the full show available from 11 September, all this for the price of a normal theatre ticket.

Put the headset on and be transported into the centre of the story. Walk around the set while Jekyll and Hyde romp through the space, look up and see the Albany’s studio ceiling, gaze down to see the streets of Victorian England. Andrew added, “If audiences can’t come to us, we’ll come to them!”

This news reached us too late to be included in our September issue.